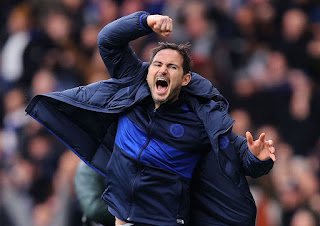 2019/2020 Football season can now be considered a good one for Chelsea and Ex player Frank Lampard. Lampard took charge of the team at a stormy period, he has however against all odds qualify them for yet another Emirates FA Cup final against their London rivals Arsenal.

The ex-Chelsea Players needs only 3 points out of a possible 6 in the current EPL season to qualify the team for next season's UEFA champions league.

Coming into this season, people would have doubted he'll be here today, Although it might be no surprises to some people as Chelsea is a big team and can guaranty some manager trophies, a perfect example is Mauricio Sarri.

Frank Lampard took career risk with love for the club to take the job of managing the team, Knowing fully well that he'll also have a chunk of players with little or no experience on a big stage such as the EPL to work with. Despite the club being unable to sign players from the start of the season the rookie manager can now look at his himself and his players and smile, regardless of the Final FA cup result because he already had a good season so far.


Meanwhile, The Blues will next season be a serious contender for the title after securing the services of Morocco's prodigy Hakeem Ziyech from Ajax and German Frontman Timo Werner with more player's service to be secured as the summer progresses.

Altogether it's a been a good season for Super Frankie and we hope next season will be better.

Title : Sports: How EPL Rookie Manager, Lampard Faired This Season so Far
Description : 2019/2020 Football season can now be considered a good one for Chelsea and Ex player Frank Lampard. Lampard took charge of the team at a...
Rating : 5
Related Posts:

0 Response to "Sports: How EPL Rookie Manager, Lampard Faired This Season so Far"