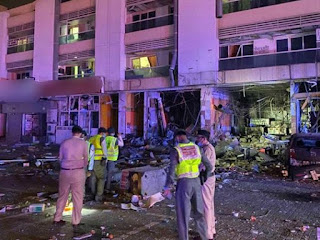 Neighbouring outlets also suffer damagesDubai: A gas explosion occurred at a restaurant in Dubai’s Al Qusais area, Dubai police said on Monday.
AdvertisementScroll to continue reading
There were, however, no casualties.
According to Brigadier Abdul Haleem Al Hashemi, Deputy Director of Al Qusais Police Station, the incident took place at 4am when the restaurant was closed.
The command centre at Dubai Police received a call about the explosion at the restaurant on Damascus Street. Two neighbouring restaurants, a pharmacy, beauty salon and three parked cars were also damaged.
“The restaurant was closed and there were no injuries. We evacuated the building’s residents for a few hours in cooperation with Dubai Civil Defence,” Brig Al Hashemi said.
Police said residents will return to their apartments after the investigation is scomplete.
“Initial reports showed that the reason behind the incident was a gas leak. Crime Scene Department at Dubai Police are preparing the final report about the accident,” Brig Al Hashemi said.
He urged restaurant owners to take routine maintenance seriously, especially during summer when temperatures are high.

2 Responses to "Explosion Rocks Dubai restaurant due to gas leakage"