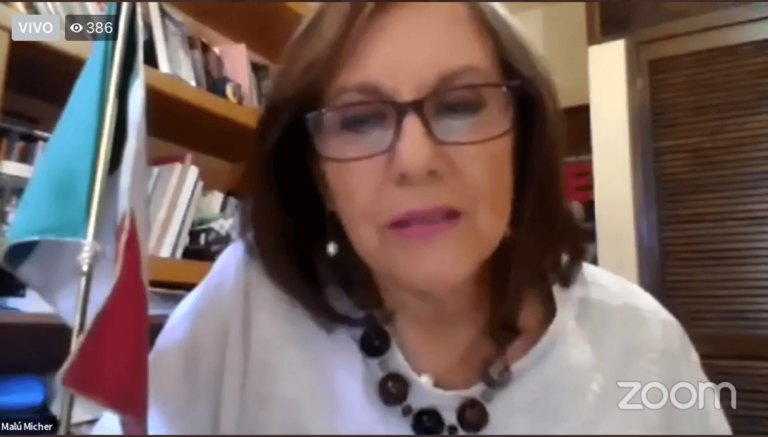 Zoom meetings allow people to wear pajama pants and a blazer and talk business from the comfort of their own home. For Mexican Senator Martha Lucía Mícher Camarena, she just wanted to be comfortable after speaking in a meeting about the economy But she made one huge mistake on camera that sent the internet into a frenzy.

The Mexican Senator Got A Little Too Comfortable On Zoom

Camarena joined members of the National Regeneration Movement political party, the Bank of Mexico and journalists to talk about how the coronavirus pandemic has affected the economy in a Zoom call. There were reportedly at least 15 people on the call. At one point during the meeting, Camarena took off her shirt and was completely topless while the other people in the call looked on in shock. After creating some buzz, she later realized that her camera was still on and apologized to her comrades for her lack of tech knowledge.
When wind got out that this incident occurred and screenshots began circulating online, people were not being nice to her at all. They continued to body shame her and make inappropriate remarks for her blunder. It led Camarena to put out a statement to hit back at these shamers. “I am Malu Micher, and I am not ashamed to have shown part of my intimacy by accident, because it is exactly the notion that a woman is ‘just her body’ that has allowed and fomented the objectification of women against which I have always fought,” she said.

Camarena is proud of her body and though she may have made a small tech mistake, she does not feel like people should be shaming her but instead praising her for the contributions she has made for the women’s movement and society as a whole. “I am a woman of 66 years of age who has breastfed four children, three of whom are today professional and responsible men, and I feel proud of my body for having nourished them” she continued. “I am a woman who has fought for the left for almost 40 years and who has occupied various public roles in my fervent commitment for the defense of human rights, I am a woman who is not ashamed of her body, I love it and I take care of it.
”Screenshots of this incident were leaked online by an unknown person. Mexican politician Martha Tagle spoke out about this saying “I will investigate and sanction those responsible for taking and leaking these photos. The violence to which you were subjected cannot go unpunished.” The person who posted these pictures will not get off the hook easily.
Mexican parliament also put out a statement saying that they will take legal action against those who continue to publish photos of the incident on social media.

Title : Mexican Senator Goes Topless By Accident On Zoom Meeting — Threatens Body Shamers
Description : Zoom meetings allow people to wear pajama pants and a blazer and talk business from the comfort of their own home. For...
Rating : 5
Related Posts: News