EXCLUSIVE! President Buhari Is Planning To Marry a Second Wife! Checkout Her Photo

Aisha Buhari, the wife of President Muhammadu Buhari, has been out of Nigeria for about two months now, following pressures from President Mohammadu Buhari to take Hajia Sadia Umar Farouq, the current Minister for Humanitarian Affairs and Disaster Management, as the second wife, a source within the first family told Pointblanknews.com

According to the source who does not want to be named, Ms. Farouq has been a very close friend of Buhari and the cabal for a very long time. She was responsible for cooking all the meals Buhari and the Cabal ate during political meetings and campaigns during the All Peoples Party, APP and Congress For Progressive Change, CPC.

The source told Pointblanknews.com that Sadia is not just a good cook but also a good masseuse who regularly gives Buhari a good massage.

“He loves massage and the lady has been massaging him for years now and she cooks well too, a family source told pointblanknews.com.

Aisha Buhari runs a Cosmetic and Beautician Business but did not add masseuse until recently, according to an insider. 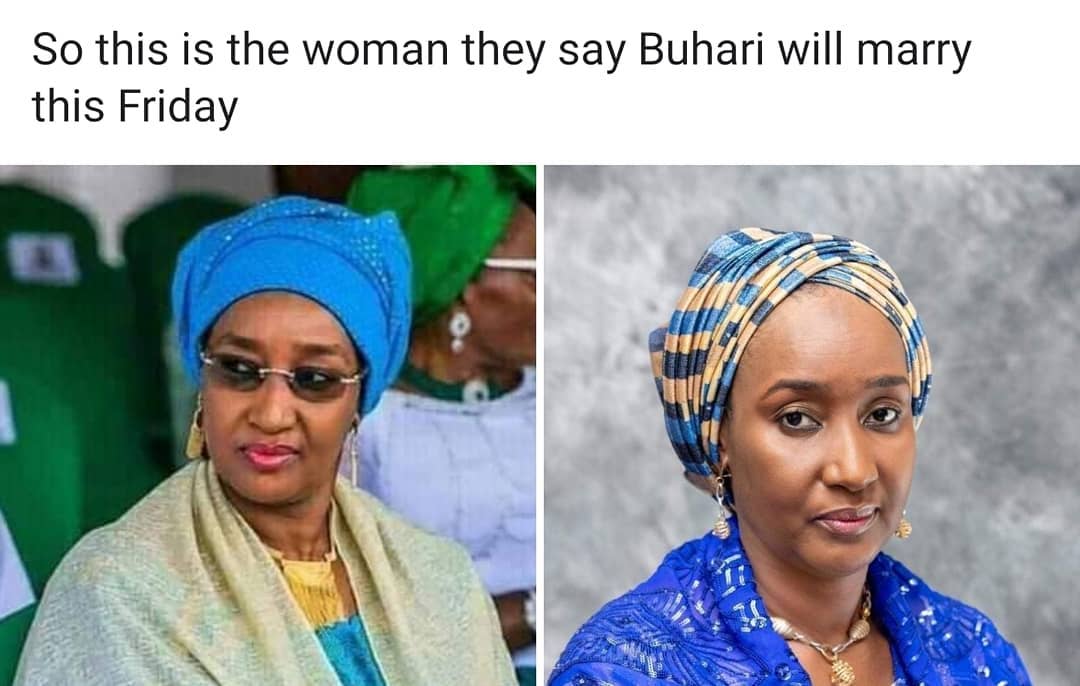 According to the source, Aisha Buhari had come to find out about Ms. Farouq’s activities around her husband and had raised alarm, she allegedly confronted the President and demanded a stop in the relationship. Her demand fell flat as the Cabal, led by Mamma Daura, Buhari’s uncle insisted on Sadia.

Sadia was then tipped for Ministerial position. She was again dropped from the Ministerial list because she was said not to have any relevant experience at the time. She was then appointed Head of the Refugee Commission.

After the 2019 Presidential elections, the cabal tipped Saida again for a Ministerial appointment. Upon seeing the list, the First lady raised alarm again. She was said to have confronted Buhari in Mecca during the Hajj. The confrontation yielded no result and she left angrily to London, according to a source familiar with the happenings.

“She has not been happy with the way she has been treated after all these years with the President. She has been fighting off the attempt by the cabal to have Baba marry Sadia but doesn’t seem to be succeeding. She left to stay in London after her last attempt to have the lady’s name removed as Minister failed,” the source said.

Pointblanknews.com gathered that the cabal never liked the first lady as they have always regarded her as an Adamawa woman who is not from the core Muslim states of the North West. Sadia is from Zamfara state.

When Pointblanknews.com reached out to the Director of Media Affairs to the First lady, Sulaiman Haruna, he did not reply to questions about Aisha Buhari’s whereabout.

But he was quoted in another medium to have said that the first lady has rights to travel wherever she likes.

It reported that the first lady, who left the country early August to Saudi Arabia to perform hajj (Muslim pilgrimage), had not returned to the country.

Muslims who participated in the hajj exercise have since returned home, but credible sources at the Villa said the president’s wife has since left Saudi Arabia for London.

“Mama (first lady) is in London. It was from Saudi Arabia that she went to London,” a  source told Daily Trust.

Asked when she would return, the source said, “I don’t know. All I know is that she is in London.”

In early July, the first lady supported her husband to host the Ambassador Extraordinary for Nigeria-Niger Cooperation, together with his wife, Fatima at the State House.

Recently, at public events, Dr. Hajo Sani, the Senior Special Assistant to Buhari on administration,  has been representing the president’s wife.

For instance, on September 25, she was represented at an event of the Organization of African First Ladies for Development (OAFLAD), on the sidelines of the 74th United Nations General Assembly (UNGA), New York by Dr. Hajo.

Title : EXCLUSIVE! President Buhari Is Planning To Marry a Second Wife! Checkout Her Photo
Description : Aisha Buhari, the wife of President Muhammadu Buhari, has been out of Nigeria for about two months now, following pressures from President ...
Rating : 5
Related Posts: News

0 Response to "EXCLUSIVE! President Buhari Is Planning To Marry a Second Wife! Checkout Her Photo"