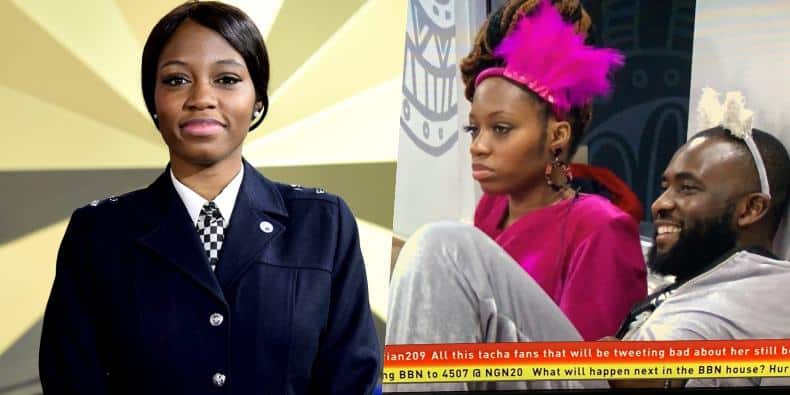 POLICE poster girl Khafi Kareem defied her bosses to appear in a series of steamy romps on TV.

The PC, who once stood alongside Met Commissioner Cressida Dick to promote female and black recruitment, was told not to take part in Nigeria’s Big Brother.

But the 29-year-old had already been granted unpaid leave and joined the show, where she has romped three times with businessman Ekpata Gedoni, 31.

Their romance has viewers gripped but she is facing an investigation by the Met’s Directorate of Professional Standards.

One colleague said: “She’s a serving British police officer — it’s outrageous. She asked permission to go on the show but, when her request was refused, she went anyway.

“Her out-of-office email reply blatantly says that she is away from work, yet no one does anything.

“Other officers working with her are furious that she can just disobey orders then swan off the Africa and tarnish the reputation of the force.”

Former bit-part actress and shop assistant Khafi joined the Met as a PC based at Lambeth station in 2015 after working part-time as a special constable for four years. 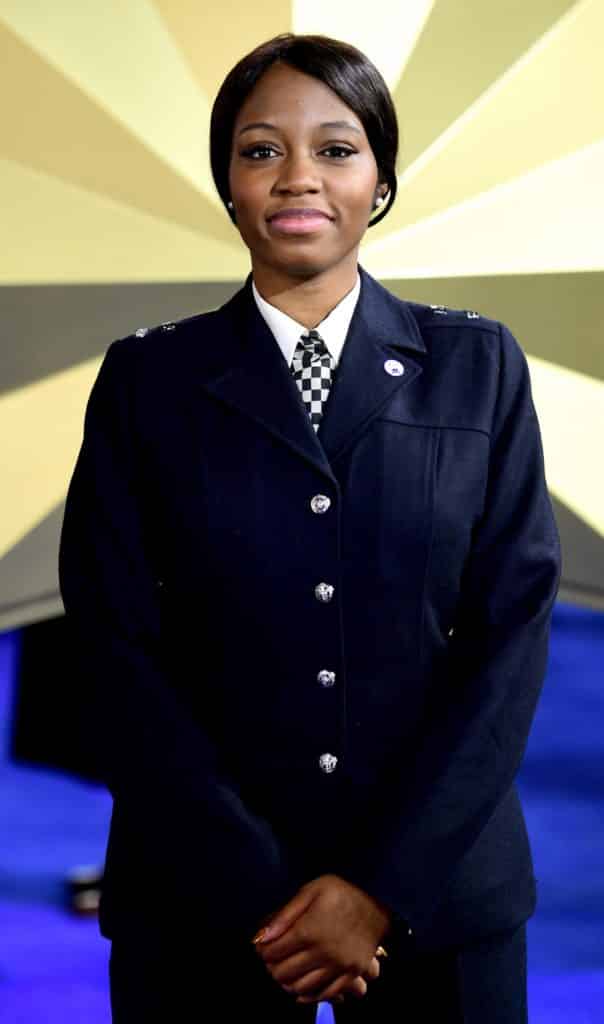 She was inspired to sign up after a 16-year-old pal was stabbed to death but has spoken out against police stop-and-search tactics.

The PC, who earns about £30,000 a year, was pictured with Ms Dick and other female officers celebrating 100 years of women in the Met last November.

Khafi, who speaks French, Italian and her native Yoruba, worked as a translator and a spotter for a female genital mutilation team looking for possible victims at airports.

But she was said to have been moved after clashes with colleagues.

After being granted unpaid leave, she asked to go on Nigeria’s Big Brotherbut her request was refused.

Nonetheless, pictures appeared on websites promoting Big Brother Naija: Pepper Dem showing the PC in her uniform while she is billed as a talented dancer and singer.

Publicity material says: “Police officer Khafi Kareem believes that you can have it all if you believe in yourself. She is not only hoping to win the prize money but she wants the exposure that being in Big Brother Naija House brings so that she can do societal good.”

Fans of the show, which began on June 30, have been eagerly following her fling with Ekpata.

Nigerian news websites have published video of the pair bucking and moaning beneath the sheets.

One article said: “There are now fears that Khafi may leave Big Brother Naija House pregnant as she and lovebird Gedoni continued their sizzling romance. The cameras caught them for the third time overnight as other housemates were dead asleep.

“The footage, now trending, showed the lovebirds moving their bodies in ecstasy under the sheets.

“Gedoni and Khafi first romped in the house on Saturday, July 20 and then again on Tuesday, July 23.

“And pregnancy can occur since the housemates still have about 70 days left in the house.”

Her TV appearances have left colleagues unimpressed. Another Met source said: “There should be no way back for her from this and her superiors will have to act.

“She fitted the mould perfectly for how the modern force wants to portray itself but seems to have got a bit too big for her boots.

“It’s hard to see how can she argue that she hasn’t brought the force into disrepute.”

The Met said she was on unpaid leave granted “for an unrelated reason” before being refused permission to appear on the show.

A Met spokesman said last night: “The Met is aware that the officer has since appeared on the show without authority. The Directorate of Professional Standards has been informed and will be carrying out an investigation into the circumstances.

“The Met does not support the officer’s appearance nor does she represent the Met whilst appearing on the show.

“All officers have a duty to behave with professionalism and in a manner that does not bring the Met into disrepute whether on or off duty.

“Those who do not behave professionally risk breaching police standards of professional behaviour, and may be dealt with by way of misconduct proceedings.”

When she was pictured with Ms Dick last year, Khafi told The Guardian: “I didn’t want any career to be off-limits to me because I was a female, or a black female.”

In March, the high-flying recruit was invited to the West End premier of Captain Marvel alongside Deputy Commissioner Lucy D’Orsi.

She revealed at the time she was inspired to join the force after school pal Kodjo Yenga, 16, was murdered by a gang for straying on their turf in Hammersmith in 2007.

She said: “I was devastated and in shock and disbelief. It wasn’t until the media started writing about it and flowers were left at the scene that it really came home to me.”

“I want to make a difference instead of shouting on the sidelines.

“How will racial abuse change if people do not stand up for other cultures? I wanted to be part of the solution.”

In addition to her police work, Khafi tweets and writes travel blog A Cup of Khafi.