Comedian AY has replied an IG user who questioned his wife’s look on his birthday. It all started when the comedian shared a video of his wife Mabel singing a birthday song to him as he celebrated his 48th birthday.

However, he was dragged into an exchange with a follower who alleged that she looked unhappy.

Commenting on the video, the follower stated that Mabel looked unhappy when everyone else is celebrating her husband. She further asked her to put on a big smile for him.

Why does she look so unhappy ,were celebrating here not otherwise.pls put on a big smile for AY the grand master of laughter.

AY in his response to the comment, pointed out the follower’s ‘unsolicited concern’ while blaming his wife’s look on travelling for hours.

@jo.sephine281 when you travel for hours and land very early in the morning, don’t expect too much. The smile you are looking for in one video, i have been getting for 15 years. Thanks for your unsolicited concern 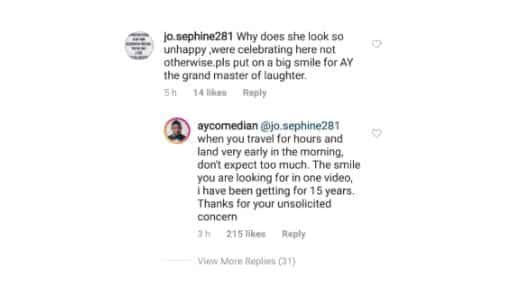 Mabel reacted to the comment and also backed her husband on her tired look being because she was jet-lagged. She wrote;

My husband reposted a video of myself wishing him happy birthday and someone commented on his page saying i looked so unhappy. Truth is, sometimes things are not really the way we see them. There i was feeling very tired from a long flight that i wasnt really prepared for,jet lag and the time difference didn’t make it any easier for me coupled with the fact that i had to follow up on everything happening back at home.

My husband enjoys me singing for him. Knowing that i wasnt physically present and i really wanted his birthday to be special, i decided to make a video. Whoever you are @jo.sephine hopefully this solves the puzzle in your head. 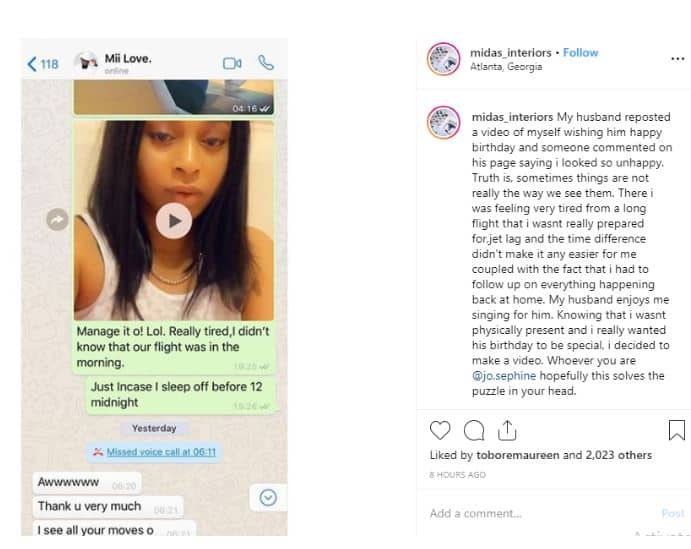 Title : AY and wife react after follower said she looked unhappy on husband’s birthday
Description : Comedian AY  has replied an IG user who questioned his wife’s look on his birthday. It all started when the comedian shared a video of his w...
Rating : 5
Related Posts: Celebrity