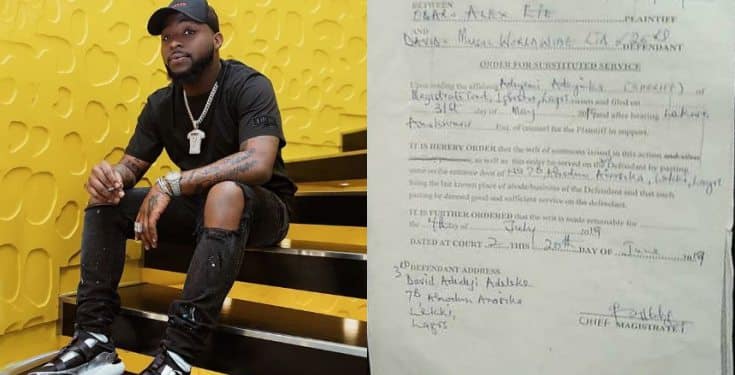 Davido has been dragged to an Igbosere Magistrate Court 2 Lagos State over an alleged fraud of ₦4, 000,000.00 (four million naira).

Davido and his personal assistant are allegedly being sued for fraudulently obtaining the sum of N4, 000,000.00 only from an American based Nigerian born upcoming artist Andre- Tejiri Ochuko Ibhihwiori In the label of Always on Cash Records.

The matter which came up for mentioning on the 23rd of May, 2019 as No 16 on the case list at Magistrate Court 2 Igbosere. Listed as Defendants in the suit marked MCL/702/19 are: David Adedeji Adeleke (Davido) – his Personal Assistant: Busari Idris Temitiope (Alias Aloma) and; Davido Music Worldwide Limited music label.

Davido and his management allegedly collected the money as fee to feature in a musical collabo with artist Tjay sometime in January, 2019 but have since then failed to either make himself available for the music collabo or refund the money.

When the matter was called, none of the Defendants, including Davido was in Court, neither were they represented by their lawyers. Counsel to the Claimant Alabh George Turnah, (MON) informed the Court that the Defendants according to the bailiff of the Court, refused to accept service of the originating processes and pleaded the Court for an order for substituted service, which the Court granted.

Davido may into full litigation or seek out of Court settlement with the Claimant who is already asking for 15% interest on the principal sum of N4,000,000.00 from the date of payment to any date that the sum is finally liquidated.

The case has been adjourned to the ”23rd of august 2019” for report of service and commencement of trial.

These is to officially notify the public that we the management of A.O.C (Always on Cash) Record Label are totally displeased with the dubious acts of David Adedeji Adeleke popularly known as DAVIDO ( @davidoofficial ) over unfulfilled 4million Naira song featuring contract with our artist Tejiri Ochuko Ibhihwiori ‘’TJay’’. ( @holatjay ) . . . Four Million Naira payment made in FULL and DAVIDO did not fulfill the contract since January 2019, neither was any attempt for refund made. . . . . The matter was reported to the police when several attempts to reach his management failed. It was presented for hearing in court for 3 consecutive times and neither he or any representative from his management appeared before the court to state their claims. We are hereby pleading that he or his management appears before the court on the next hearing set for 23rd August 2019 so that the matter can be settled amicably by law as all we want is the refund of the 4 million naira paid for the unfulfilled contract. . . . . Signed Management . . . . #Scam #Scamalert #Justice Cc @davidoofficial, @iammayorkun @iambrodashaggi @peruzzi_vibes @yonda_music @aloma_dmw @instablog9ja @krakstv @lindaikejiblogofficial @updateboyzofficial @yabaleftonline @thepamilerin @votstvng @officialhiptv @officialefcc @naiialoadedcomng