Teacher Narrates How Robber Raped Her Using 'Polybag' As Protection 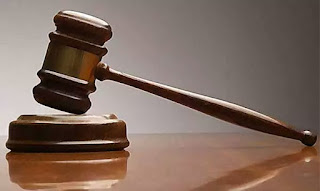 A teacher (name withheld) of a Catholic Secondary School in Lagos, has narrated before an Ikeja Sexual Offences and Domestic Violence Court how an armed robber raped her in her home using a polythene bag (polybag) as protection.

The News Agency of Nigeria (NAN) reports that the teacher made the revelation on Tuesday while giving evidence during the trial of two men in their twenties- Babatunde Oluwaleke and Daniel Ojo over alleged rape and armed robbery.

While being led in evidence by Mr Akin George, the lead prosecuting counsel for the state, the teacher gave a harrowing account of how she was raped in her home by Oluwaleke on March 6, 2018.

She told the court that between the hours of 2am and 3am while asleep in her bedroom, she was awoken by some noise and she saw two males, a tall one (Ojo) and a short one (Oluwaleke) both dark in complexion, ordering her to get up.

She said: “I told them I had no money and the first defendant (Oluwaleke) said I must produce money or he will kill me. I was pleading and the second defendant (Ojo) told him that they should go because that is not what they came for.

“I was tying a wrapper and the first defendant asked me to lie on the bed, I was pleading and he pushed me back on the bed, I begged that he should not rape me that I don’t have money but he took my Automated Teller Machine (ATM) card, mobile phones and all that I have.

“He brought out a knife, placed the tip on my stomach and threatened to stab me if i did not cooperate. When he opened my wrapper, he saw I was menstruating and I didn’t know from where he produced a polybag.

“He tied the polybag on his penis and inserted his penis into my vagina. I was pleading that I could be his sister but he ignored me, asking me to shut up. Much later, he removed the polybag and raped me using nothing.

“When the first defendant was done, the second defendant was telling him that was not what they came for and that they needed to go.”

She said after they left, terrified, she prayed hoping that the other members of her household were unharmed.

The teacher said when she went to check on members of her family, she realised that they had all slept through her ordeal.

“My mother and her friend were still sleeping in the sitting room. Things were scattered and the contents of their handbags were emptied on the floor. I woke them up and told them what happened.

“We stay in a one-storey building, we went downstairs where my younger brother stays and we noticed the armed robbers used a rope to tie the door of the mosquito net which is attached to a spring so that it does not make noise.

“My younger brother was also still asleep with his friend, we woke them up and I told them what happened and we took an inventory of all the property that was stolen,” she said.

The teacher said members of her family immediately reported the crime to the authorities and she was taken to the hospital that morning for medical examination and counselling.

She said on that day, she was also taken to the Afonka Police Station, Alimosho, Lagos where four recently apprehended armed robbery suspects were shown to her and she was asked if any of the suspects had raped and robbed her.

“Immediately I saw the first defendant, I recognised him, even with my eyes closed, I can identify him.

“I identified him to the police, wrote a statement and went home and the case was transferred to the Special Anti-Robbery Squad (SARS).

“My lord, I want fair justice to be served in this case,” she said.

Following her testimony, Mr. O Egbo, the counsel to the defendants requested for an adjournment in order to effectively cross-examine the teacher.

Obliging his request, Justice Abiola Soladoye adjourned the case until Sep. 30 for cross-examination of the witness.