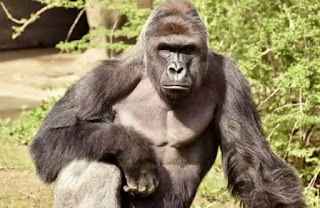 Nigerians have reacted to the news of a gorilla allegedly swallowing N6.8million in the Kano Zoological Gardens

A finance officer in the zoo, was quoted as saying the gorilla “sneaked into their office” and carted away the money, before swallowing it.

The incident is said to have happened during the Sallah celebrations.

Umar Kobo, the managing director of the zoo, confirmed that the money is missing and that the issue is being investigated.

“The issue is under investigations for now and I don’t want to say anything on the matter, many journalists have come to meet me but I don’t want to talk anything. What I can confirm is that money is missing,” Kobo said.

Abdullahi Haruna, police spokesman in Kano, is quoted as confirming that 10 persons, including those on duty when the money went missing, have been arrested.

The news has since stirred reactions from Nigerians on the social media.

@Chitechibrenda “Maybe cows will start entering Central banks and the statement of a dog eating assignment is validated.”

@_S_O_T “Is this a gimmick or what? Gorilla swallows 6.8m in Kano zoo. That is FRAUD. Let everybody in the Finance unit be locked up to confess & also a quick surgery should also be conducted on that animal to rescue the cash.”

@Johnsoncollins “Snakes and monkeys have turned to billionaires in Nigeria,while the citizens living in extreme poverty.”

“Next on the line Grass-cutter Will swallow CBN ,Welcome to Zoogeria the Animal kingdom.”

@MurphyDlaw “Are we now in animal kingdom? This time not snake again.”

@Omenwa1006 “Who knows how much cows have been swallowing in aso rock, since they move in and out freely?And what is 7m cash doing in that office?

Title : Nigerians React As ‘Gorilla Swallows N6.8million In Kano Zoo’
Description : Nigerians have reacted to the news of a gorilla allegedly swallowing N6.8million in the Kano Zoological Gardens A finance officer in the z...
Rating : 5
Related Posts: News