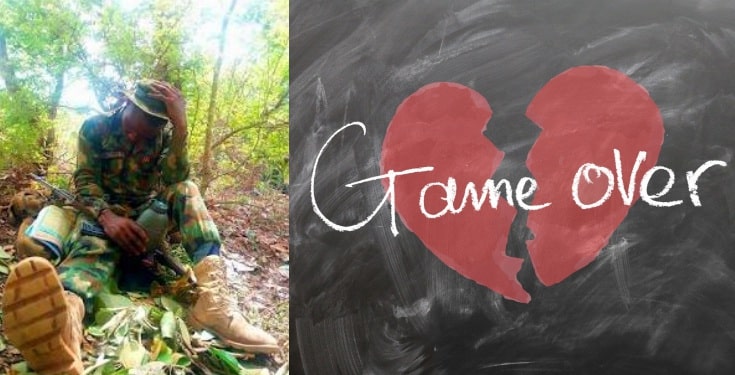 A Nigerian soldier has revealed his heartbreak after a lady whom he has been dating for five years turned down his marriage proposal.

According to the soldier, his lady’s loving attitude towards him changed after he joined the army and was posted to Maiduguri in Borno state as she said she won’t be able to marry him because she doesn’t know when he will die.

Read below what he shared with Military Life;

“I met this girl for over five years now and we have been dating,she made me to believe that she loves me so much, that she can’t do without me. I showed all the love as much as I can provided her with everything. Two Years after meeting her,i joined the army and I was posted to Maiduguri and I have been there making plans on how to get married to this lady not knowing that she has her own plans.

Since I joined the military, her attitude changed a little bit though I can’t figure out what’s actually the problem.not until I came back to propose to girlfriend with my heart full of joy hoping to get a positive answer, all of a sudden this lady looked into my eyes and said she can’t marry me, we can date but she won’t be able to marry me because she don’t know when i will die.

Since then I have been in thinking mood because I can’t believe what I heard from the lady I love so much.

Title : Sad! Nigerian lady rejects soldier’s marriage proposal
Description : A Nigerian soldier has revealed his heartbreak after a lady whom he has been dating for five years turned down his marriage proposal. Accor...
Rating : 5
Related Posts: