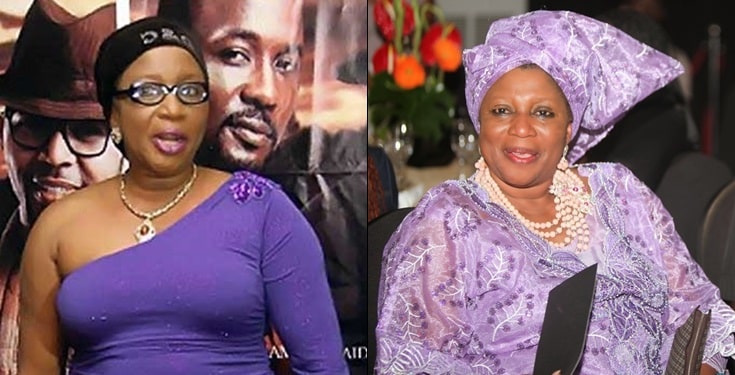 Veteran actress, Binta Ayo Mogaji-Oduleye turned 55 recently and she opened up to Entertainer about her career, home, movie industry, and her rumoured relocation to the United Kingdom among other issues. Enjoy it.

Thank you, I am very excited turning 55 but sincerely, I have gained a lot and lost nothing except my dad who died about 48 years ago.

What do you miss in him?

I miss everything a child will miss in a dad. It’s not that we lacked anything after his death, but when we’re asked to invite our parents to school then and you see some students coming over with their dads, you felt bad. Again, something will happen to you and you would think of your late father, saying, ‘assuming my dad was alive, this wouldn’t have happened to me’.

After Jombo, you have not shot another film. Why is this so?

Yes, you a right, Jombo was my last movie, but right now, I’m working on a new one entitled, The Third Party. We are putting finishing touches to it now. The film is being shot in collaboration with a UK-based company and I don’t know the format the release will take, but I’m not considering going to the cinema with it, it might be screened to a select audience or I could do a launch in Lagos.

Why did it take you more than 10 years to produce another movie after Jombo?

It’s more than that. Jombo Part 1 was released in 2003 and the second part in 2006. The reason is that I produced Jombo to make a statement because I don’t believe in producing film for producing sake; I decided to produce it so as to tell people how a standard film should be. And the new film, Third Party is my debut as a director. And I didn’t act in it.

It’s because I’m the director, I can’t be directing and at the same time be in front of the camera, acting. I co-produced and directed the film. That’s to make another statement that, I can act and can also direct a standard movie.

What’s the film all about and who are the major characters in it?

It is a compact movie, a family sitcom, which centers on six major characters. I featured Ronnie Dikko, Kunle Coker, Bolanle Ninalowo, Lucy Hammed, Kokocha, my girl from the UK, and Tobi Abraham. I had someone on Skype and a maiguard. The movie centers on parents who are too strict with their children, thinking that they will behave like saints only to find out that the kids are not what they think.

Is the movie based on true-life experience?

Is it true that you relocated to England some years ago?

No, I have not been to England in the last five years. I often go to the United States of America. However, my husband relocated to Ireland and I do visit him when I have the time. He comes home often, at least twice in a year.

You seem to be quiet acting wise lately, why?

People who say I’m quiet have not been watching movies. I have been so busy in the last two years to the extent that, I often felt sorry for myself that I might break down one day. At that point, I would just travel out of the country and take a rest, because if I don’t do that, people will still invite me to locations.

You’ve been acting for about 40 years; have you really made money from the movie industry?

I’m a professional actress and I make enough money to feed my family and me, you know how this job is.

But you are not flamboyant?

If there is anything to be flamboyant about, I will be flamboyant. Mind you, I’m a technocrat and career actress and I’m not like those who call themselves superstars. For the fact that I still take part in movies means I’m still relevant. I don’t have any other job except acting and it is paying my bills.

Why the choice of Ibadan as your base and not highbrow Lekki in Lagos?

What are they doing in Lekki, Lagos? I live in Old Bodija in Ibadan and it’s better than Lekki or Magodo in Lagos. I have been living in Old Bodija since 1997 and that’s our (highbrow) Ikoyi of Lagos.

How do you cope as an actress and mother?

My children know what I do for a living, so when I have jobs, they stay with my mother. You know, I still have a mum and when I’m back, they return home. That’s an agreement between us.

You are a veteran but lots of people see you as a bridge between the young and old. How will you rate the young ones in terms of their acting skills?

Are you comfortable acting with any of the young ones?

Yes, anybody can call him or herself an actor. But we know who is who among us when it comes to acting.

Have you had cause to reject any script in your acting career?

They know the kind of person I am, so nobody dares approach me with a bad script.

Okay, how will you compare your role in Igbanladogi and that of Amebo you played in Owo Blow?

Igbanladogi was Igbanladogi and Amebo was Amebo. They are two different characters, so there is no way we can compare the two because they are poles apart.

But then you became popular with Igbanladogi

(Cuts in) I have been popular before Igbanladogi and Igbanladogi was made popular by the author, the late Toba Opaleye. I knew he normally read something during his radio programme and any time I stumbled on the programme while the script was being read, I just laughed, not knowing that I would one day take part in the film. My roles in Owo Blow and Sergeant Okoro are different from Igbanladogi and others. My acting is based on the script because I’m not a static actor.

How do you manage to juggle between being an actress, mother and wife?

With God on my side, I created a synergy by making sure that no one suffers

We have lots of broken homes among actors and actresses, how do you manage to keep your home?

My husband is a Briton, though a Nigerian. Before we got married, he knew he was marrying an actress, he knew that I’m a career woman and he understands the dictates of my job, and by the time we got married, it was a done deal.

Apart from the sitcom, are you working on any other movie for now?

No, we are in the final stage of the production of Third Party; that is post-production, so I just want to push this one out before embarking on another project.

By directing this movie, are you planning to retire from acting?

No, not now, but when I retire from acting, I will go fully into directing because I have already directed some movies.