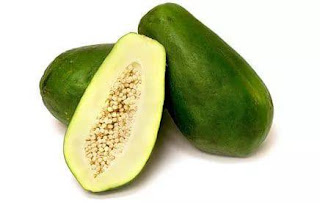 A new medical report has revealed how unripe pawpaws can heal both external and internal ulcers alongside increase your libido when cooked and eaten.
Mrs. Aisha Abdullahi a Nutritionist with a private hospital, Asokoro Abuja, said on Wednesday that consuming unripe pawpaw aids in the healing of external and internal ulcers.
Abudulahi said this in an interview with the News Agency of Nigeria (NAN) in Abuja.
According to her, unripe pawpaw contains high percentage of papain, which makes it a wonderful food that helps the digestive system function better. She said explained that unripe pawpaw has numerous benefits due to its high contents in vitamins A, B and C, fibre and protein, among others.
The expert said that consuming unripe pawpaw on an empty stomach helps in the digestion of protein, reduces inflammation, improves immune system as well as helps expel bacteria and viruses.
She further noted that unripe pawpaw was an anti-inflammatory supplement which helps in reducing inflammation, including osteoarthritis and asthma, among others.
Other benefits of unripe pawpaw include its richness in antioxidants which helps in the prevention of cholesterol oxidation.
“It also reduces the risk of heart attacks and strokes and also binds toxins that cause cancer in the colon.
“Consuming the fruit also helps with digestive problems such as bleeding piles, chronic diarrheoa as well as constipation.
“ Pawpaw consumed in juice form helps reduce inflammation in the lungs especially to those who smoke and those that are exposed to secondhand smoke.
“It is also a remedy for cough, worms, bladder problems, jaundice, gastric fermentation and gastritis.
“The unripe pawpaw in juice form also helps regulate the menstrual cycle especially for those with irregular menstrual cycle,’’ she stated.
Abdullahi further said that boiled unripe pawpaw fruits help in the improvement of potency especially in men.
She also stated that pawpaw leaves was a remedy for people suffering from epilepsy, stomach ache and severe constipation.
She, however, stated that pawpaw has been scientifically proven as a cure for many chronic diseases such as pile, among others.
The nutritionist also stated that pawpaw leaves helps in the treatment of convulsion, malaria, diabetes, stomach ulcer and piles.
Abdullahi enjoined patients suffering from conditions such as diabetes, stomach ulcer as well as gastric ulcer to include pawpaw in their daily foods.
The expert also warned that consuming unripe pawpaw juice may cause allergic reactions to pregnant women, adding that it may induce abortion.
loading...
Tweet